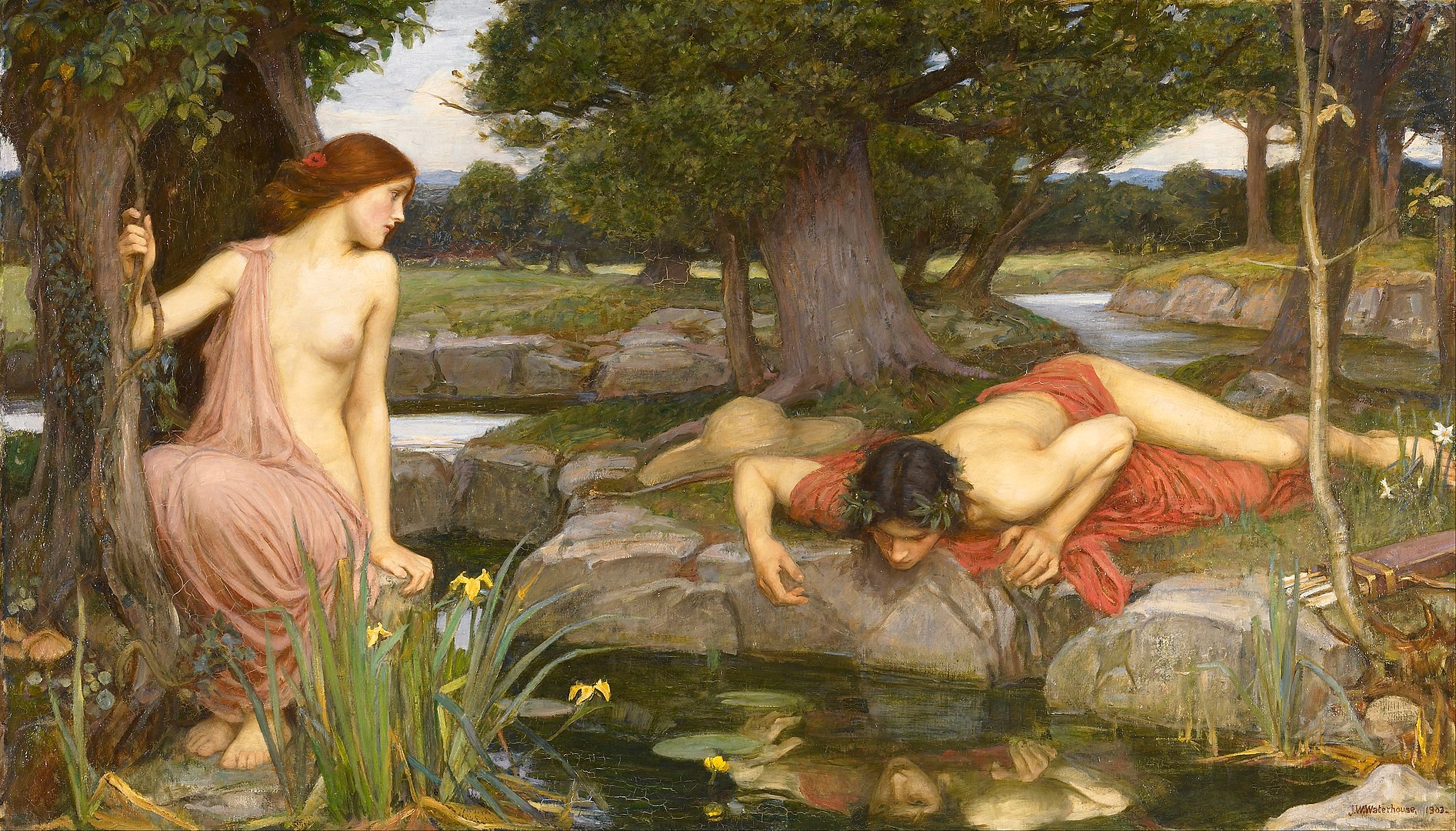 The wave of COVID-19 related marketing emails is already a jokey cliche.

Here’s what I didn’t need to know: whether or not a retail store is wiping down its shelves. (Because I’d just assumed a basic standard of sanitation, it being 2020 and all.)

One of the first COVID-19 emails I saw out the gate was from Best Buy. 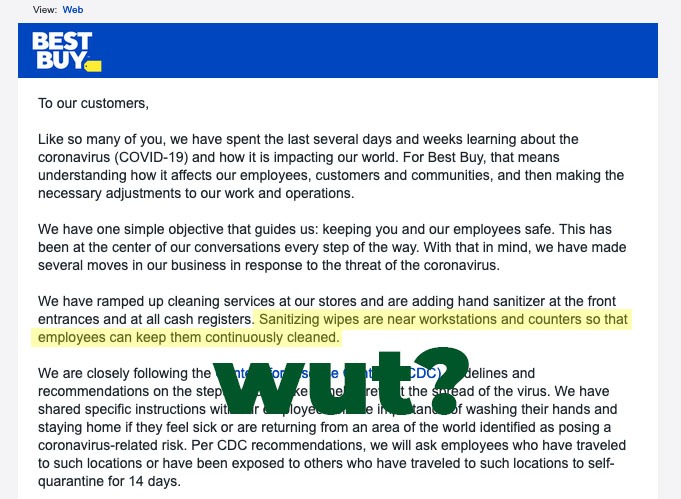 First, why? Why did some middle-manager at Best Buy corporate feel the need to be the first brand to speak about this? And who was so out of touch that they felt they needed to let us know they wipe down their retail displays? Didn’t you know that you could have said nothing, and that would have worked better?

Second, did they not think this could backfire? Because now I don’t associate Best Buy with “safe”; I now associate it with “everything is covered in germs, normally.”

If your brand is “faceless corporation that gets the benefits of being a human (legally) without actually… you know… being a human, then it’s not the time to “lead.”

Mark Cuban said how companies respond to this could define them for the next decade. I agree. If you’re taking care of your workers, it’s hard to be mad.

You don’t have to be a leader. But make sure you’re not being a coward.

…we absolutely need you to not be a coward.

What does “not being a coward” look like in the days of social distancing?

A good start is “being brave enough to do uncomfortable things.”

Sending a templatey, “legal has scrubbed this of personality” email to everyone whose contact info you have isn’t uncomfortable. It’s the opposite: it’s the definition of corporate “safety” that means “no risk at all.”

So that’s not even uncomfortable.

What is uncomfortable is being emotionally vulnerable when you need to deliver bad news.

That’s what CEOs and real leaders are supposed to do.

“Hey, I’m sorry, but the finances just aren’t working out to keep everyone on board right now. I’ve tried cutting salaries across the C-suite, but it’s still not enough. We’ll commit to rehire you if things turn around, but – and I’m so sorry – we’re going to have to furlough your team.”

That kind of message is what brave, emotionally open leaders say.

But cowards? They do what the Bird’s “leadership” did.

When law-ignoring scooter company Bird needed to lay off a big pile of humans – which a lot of companies need to do right now – their leadership didn’t do the brave thing.

They did the most selfish, cowardly thing possible.

They had the CEO’s executive assistant facelessly read a prepared statement over a mass Zoom meeting.

(The message was delivered in such a stilted, awkward way that many people thought it was actually a recording.)

Then Bird reportedly shut down email and Slack almost immediately for affected employees, meaning they couldn’t even say goodbye.

This was clearly about protecting the company, not doing the right thing.
Even Bird’s corporate response was cowardly, essentially saying, “Hey don’t be so mean to us, we’re sad too ☹️” 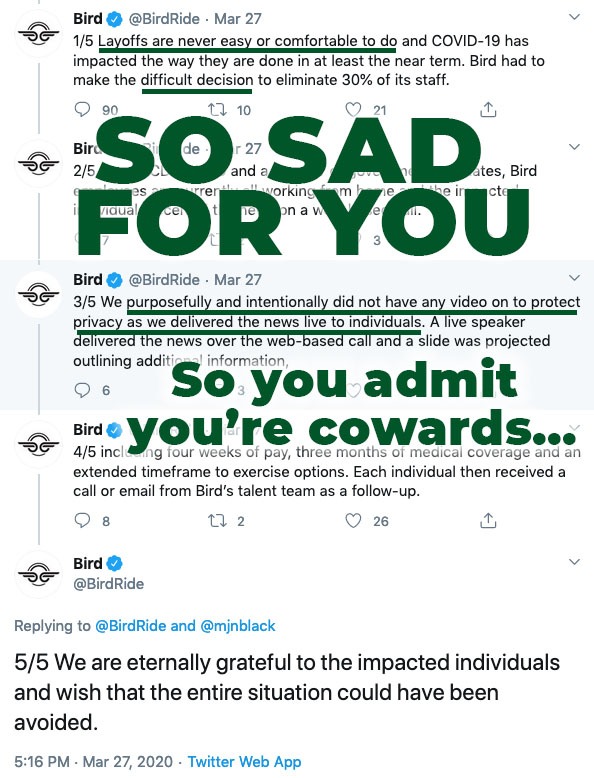 What should Bird’s leadership have done? The CEO himself should have shown up on camera to make the announcement, himself. Then the top leadership team should have divided up individual calls to every single person who was affected.

It isn’t hard to do the right thing if you start from a place of being human.

But these brands… they’re not thinking about being human.

They’re clearly living in a weird alternate reality… one filled with groupthink and “Yes’ people sycophants who tell leaders how smart they are.

They use jargon that dehumanizes the contributions and responsibilities of people.

And so they’re completely unprepared when they need to respond in unexpected ways, like during this crisis.

Small businesses seem to be doing this alright

On the other hand, companies who remember their humanity – which, I’m seeing, is mostly small businesses – are doing this better.

They’re saying, “Hey, we’re trying really hard to keep paying our employees, but we need your help. Can you support us?”

I’m much more willing to get on board with that message than “WE’RE HERE FOR YOU.”

Don’t be a leader, just do the right thing

Look, times are hard. Not everyone has the war chest to pay employees for 3-6 months of no revenue. 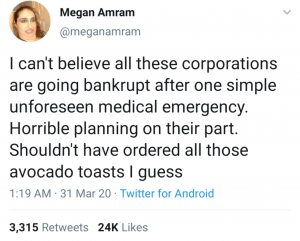 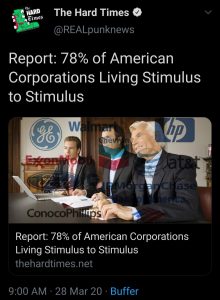 But can we all agree not to do what MicroCenter did this morning?

We shouldn’t even be talking about this anymore. It’s been weeks of everyone weighing in about “HOW TO MARKET DURING CORONAVIRUS LOL”. (And now I’m doing it too, ugh.) 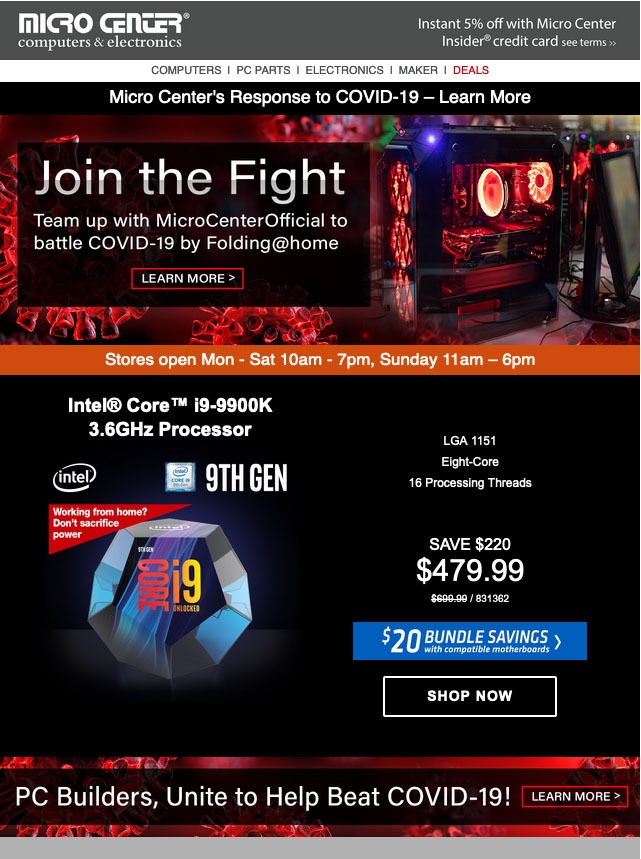 “Join the fight… by buying crap?”

(Last one was for fellow parents of young kids. Solidarity in chaos.)